Weeknotes: personal reflections from the ODI research team. Keeping you informed about our projects, research and decision-making processes. This week: investigating the relationship between the physical and digital halves of a twin.

A scenario for connecting digital twins

The research question for this project is to “What are the ways digital twins can connect and interact, and are some of them more conducive to creating an ecosystem which complies with the Gemini Principles?” as a means of exploring what a National Digital Twin might look like. We’ve thought a lot about digital twins in isolation, but what we really want to understand is how they might be connected. This is a “data infrastructure” question and the ODI advocates for data infrastructure that is as open as possible.

We want to build a prototype that is rich enough to be be a good demonstration of the technologies and connections, but simple enough to be accessible. We haven’t yet come across a real life example so we’ve been using our imagination a little. We’ve been kicking around a sketchy network diagram that looks like this.

During our conversation we identified three digital twins:

In this scenario the National Grid is the intersection point. The grid already has twins of its plant assets and operations, and they would benefit from access to the data and insights about the BMS demand and PV supply models

Here’s the (quite terrible) sketch we made during the conversation (writing upside-down esses is hard!). The green pen is the district heating network / Imperial College London point of view; and the pencil is Open Climate Fix 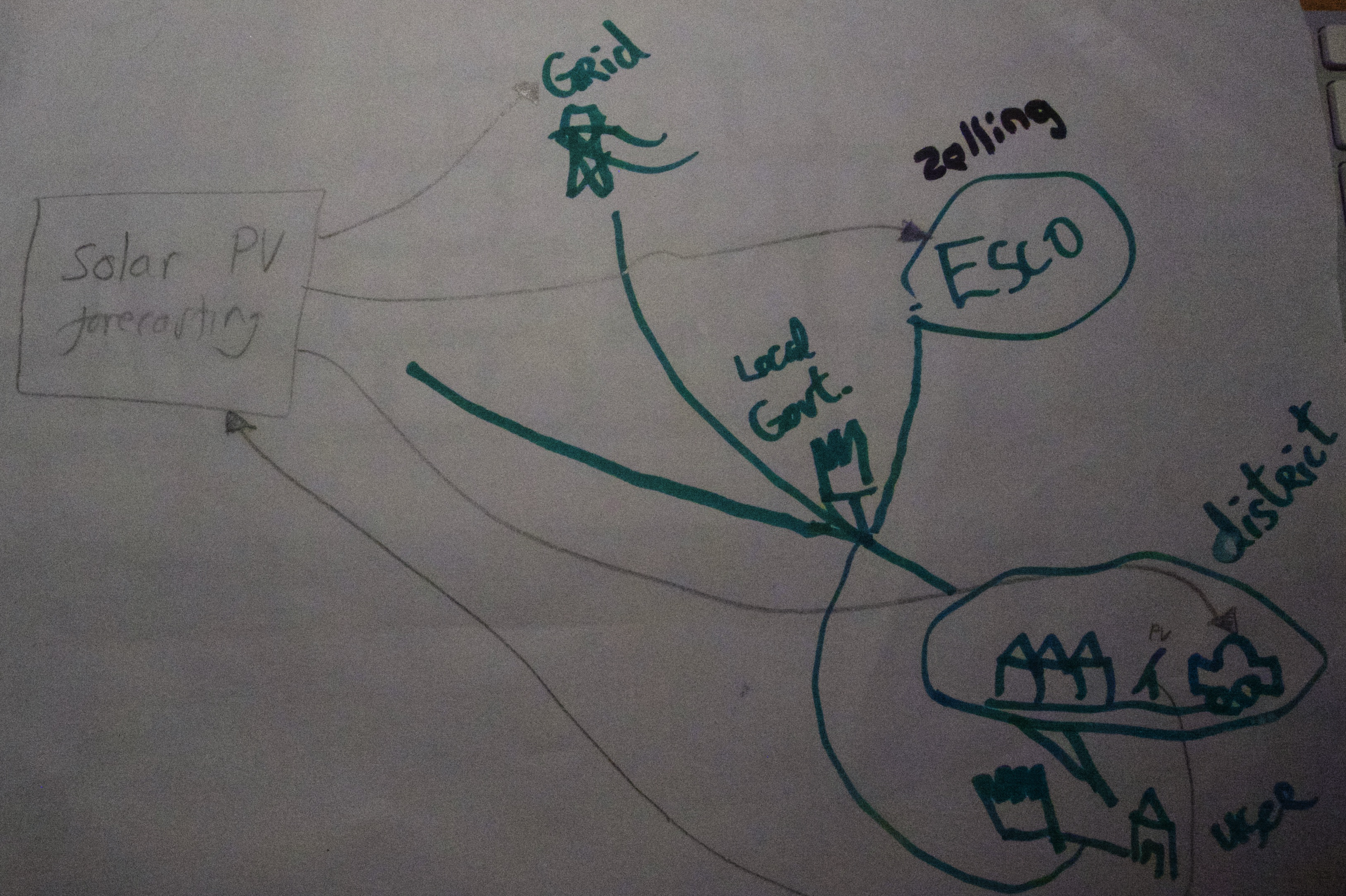 Requestioning: what is a twin?

Yet on closer inspection of the lightbulb the closeness of the physical object to its digital representation turns out to be a bit of an illusion. Although it looks like a familiar lightbulb, on screen and in real life, it actually contains

Similarly for the robot arm – the angle of the servos (actuator) are being read by potentiometers (sensors) and its the sensor that’s essential to draw an accurate visualisation.

We could have represented those readings separately in the visualisation, but we chose to use the icon of a bulb or a drawing of an arm, because it’s easier for us to make the association and interact with the asset.

So what is “real thing” or asset when it comes to a space like a room or an apartment. Fionntan and I are both okay with an asset being an “empty” environment – the air and its humidity/energy(heat) properties – which is really a proxy for the health of the walls, and the comfort of the residents. I really had to think about this, it’s confusing because the terminology in the IOT world is to talk about either the sensor or actuator as a Thing.

A room’s parameters and lifecycle is complex, even more so the notion of human comfort. But we can use a few carefully chosen parameters to act as proxies – in our case temperature and humidity. Ultimately what really interests us is the effect of our decisions, which are enacted by interventions – manual or automatic. The sensors are just there to observe the properties of the physical assets before and after the intervention.

This seems obvious in some ways, but I’m curious how this subtlety is revealed by the hardware – inside-out as it were… I wonder, what would Rachel Whiteread think of Digital Twins?

I’m keen to start learning about the hardware but even a short internet search reveals too many choices – and a different resistor for every occasion, it’s overwhelming. So I decided to get this complete prototyping kit: It has a wifi enabled micro-controller and a few example projects that I can learn with, including one using temperature and humidity, so I know I’ll at have the correct resistor values and jumper wire lengths etc.

This week I am powered by: Intersections
Thank you to: Ed O’Dwyer from Imperial College London and Jack Kelly from Climate Fix for being generous with their time